Ascher Rothschild is my 3rd great-grandfather, and I have been thrilled to find so much information about him. He has definitely left his mark on the village of Vöhl. But before I get too far into the story of Ascher Rothschild, I need to apologize about a typo on my first blog post about Salomon Abraham Rothschild. In it, I referred to Ascher and Sprinza’s marriage record, and indicated Ascher was the 6th child and 2nd son of Salomon Abraham Rothschild, and intimated he was the youngest child. The extract actually says he was the 4th son and 6th child. It doesn’t indicate where he falls in that lineup. I’ve corrected the original post.

There’s a little bit of a mystery about Ascher’s birth year. The marriage record of 19 November 1817 lists his age as 28, meaning he was most likely born in 1789. When he passed away in January of 1859, his death record indicated he was 78 years old, putting his birth year at 1780 or 1781. In this instance, I’m more inclined to believe the marriage record than the death record, so that’s the year I’m going with.

As with the other posts so far, unless otherwise noted, the source of the information regarding Ascher Rothschild comes from the civic records in and around Vöhl, which have been researched and transcribed by Karl-Heinz Stadtler, and can be found at http://www.synagoge-voehl.de/synvoealt/Juden_in_Voehl/index.htm.

In the civic records of Vöhl in 1817, he’s listed as “Rothschild’s heir”, and more than likely refers to the estate of Salomon Abraham Rothschild, who passed away sometime after May of 1816.

Ascher Rothschild was a merchant and a “Geldheber”, or money lender. He was very wealthy. It’s believed that during the course of his lifetime he gave each of his 12 children 3000 Thaler. According to the website www.amason.net, in 1838, two Prussian Thaler were equal to 3 1/2 Gulden. Both were minted in silver. I haven’t been able to figure out what that would be in today’s market, but I suspect it’s quite a bit.

In his research on Ascher Rothschild, Karl-Heinz Stadtler was in contact with a published and respected German researcher named Norbert Hansen. Mr. Hanson provided Karl-Heinz with an excerpt of Ascher and Sprinza’s marriage record. When pressed for details on its origin, Mr. Norbert said it was from the Stadtarchiv of Homberg/Ohm. This makes sense, since this is where Sprinza was born. My attempts to contact and request a copy of the marriage record directly from the Stadtarchiv have gone largely unanswered. I hope that I will, at some point, have the complete record. And, given the handwriting that’s visible, that I’ll be able to find someone who can read it for me! I’m getting better at reading the “alteschrift”, but this is particularly bad.

Sprinza Sternberg was born about 1797 in Homberg/Ohm, the 2nd daughter and 2nd child of Joseph Sternberg (about 1771 – ?) and Rechel Löb. Per the marriage record, Joseph was a “Burger und Roßhändler” or “Citizen and Horse Handler” of Homberg an der Ohm. In addition to Sprinza, Joseph and Rechel were the parents of Breinchen Sternberg Katten (1795 – ?), Isaac Sternberg (1802 – 1886), Helene Sternberg Rothschild (1806 – 1886), Blümchen Sternberg Rothschild (1810 – 1855), and Adelheid Sternberg. You’ll notice two other of the Sternberg sisters ended up with the last name of Rothschild. Blümchen is Ascher’s 2nd wife, and Helene married Ascher’s nephew, Ruben Rothschild. I promise we’ll learn more about them later.

Sprinza’s name has many, many variations. Sprinz, Schprintz, Spring, Sophie, Sophia, Iris, and Bertha. The first three are all easily explained, and Sohpie/Sophia was likely her civilan name. Iris was on a transcription provided by ancestry.com, so I take that one with a grain of salt. The only place I saw her listed as Bertha was on Moritz’ death record. Since Moritz was raised primarily by his aunt/step-mother Blümchen, I’m wondering if “Bertha” is perhaps Blümchen’s civilian name. Or maybe Bertha was her middle name and it just wasn’t written down anywhere else.

You know, it’s funny how things work. It’s been a couple hours since I started this, and I just received an email from my friend Karl-Heinz which includes not only the full marriage record but also a transcription! You, dear reader, get to see the image as well as get a translation. Let’s see what we learn!

In the year one thousand eight hundred and seventeen on the nineteenth of November at noon, Ascher Rothschild, the 4th son and 6th child of ________ Salomon Rothschild in Vöhl, 28 years old, and Sprinz, the second daughter and second child of the Citizen and Horse Handler Joseph Sternberg of Homberg, 20 years old, were by Koppel Schul____ copulated [married] from Gießen.

Since Ascher Rothschild is inexperienced in writing, the town clerk of the local judicial office has signed this protocol for him vicariously.

So, now you know what I know about their marriage!

Ascher Rothschild heavily financed the construction of a school to be used for the education of the children of the Jewish community, and it was completed 17 July 1827. I truly believe this speaks to his character: a man who couldn’t sign his own marriage record built a school to benefit future generations of Jewish children. The deal was that Ascher would provide the bulk of the money needed, and each Jewish family in the community would make monthly payments to repay the loan. All seemed well until after the school was completed when a gentleman referred to only as “The Basdorfer” protested. Whether he changed his mind or felt he was being overcharged is unclear. The Marburg City Archives for 1827 state, “A man named Rothschild, who had two first names, of which the second could be ‘Ascher’, is a board member of the Jewish Community. In this capacity, he has to deal with the refusal of ‘The Basdorfer’ to contribute to the costs of the Jewish school finished some time before.” Also in 1827 he, and others, give an explanation about the financing of the Jewish school to the district office.

In 1829, the Jewish school was dedicated as a synagogue. The school teacher, who had been living at the school, moved into Ascher’s home with his family, and school was taught there from that point forward. The issue with “The Basdorfer” really comes into play at this point, because the chairs — referred to sometimes as stalls — were paid for monthly.

In May 2019, it was at the invitation of the Förderkreis Synagoge in Vöhl, e.v., to join their 20th anniversary Jubilee. There were four of us from the States: Geoffrey and Daniel Baird, my cousin Camille Calman, and me. The Bairds ancestors, the Frankenthals, lived next door to our ancestors the Rothschilds. It was fun to get to know our “neighbors”. Both Geoffrey and Daniel had been there before, but this was a first for Camille and me. We entered the sanctuary with it’s robin’s egg blue cupola ceiling dotted with gold stars, it’s stone floors, and a women’s balcony surrounding it. Camille and I took a moment to breathe it in. Karl-Heinz walked past us, striding purposefully just past the first row of chairs, turned right and walked to the first chair on the row. With a huge grin on his face he said, “Hier ist Platz Nummer Eins.” Here is seat number one. We were confused, so he explained.

In 2000, less than a year after the formation of the Förderkreis, Ascher’s great-grandson Richard Rothschild and his wife Gerda came back to Vöhl for a visit. Upon entering the synagogue, Richard made his way to where Karl-Heinz now stood, and announced “Platz Nummer Eins” was the hereditary seat for the Rothschild family. After a few minutes in the sanctuary, Camille and I went upstairs, realized the header had numbers painted on it. The women and children also took part in this seating hierarchy, it seems. It truly was a transformative moment for me to sit under that number, knowing my 3rd g-grandmother had sat there with her children, including my gg-grandfather. And to sit there with Camille, who is descended from both of Ascher’s wives, was just the icing on the cake!

Ascher and Sprinza’s youngest son, Moritz Moses Rothschild, was born 28 August of 1833. Just 8 days later, on 5 September 1833, Sprinza passed away, probably due to complications in childbirth, I would imagine. Ascher ordered a veritable monolith of solid granite, about 3 feet high, 12″ thick and nearly 18″ across. It is, without question, the most striking headstone in the Jewish Cemetery of Vöhl, standing out from all the rest. Thanks to the Baird brothers and also to the kind people on the Facebook group “Tracing the Tribe”, it reads as follows:

Here lies the esteemed woman Shprintz daughter of Yosef Sternberg, wife of Ascher Rothschild. Died with good name on Thursday 21 Elul 5593. May her soul be bound in the bond of the living, her soul resting with the righteous men and righteous women in Paradise. 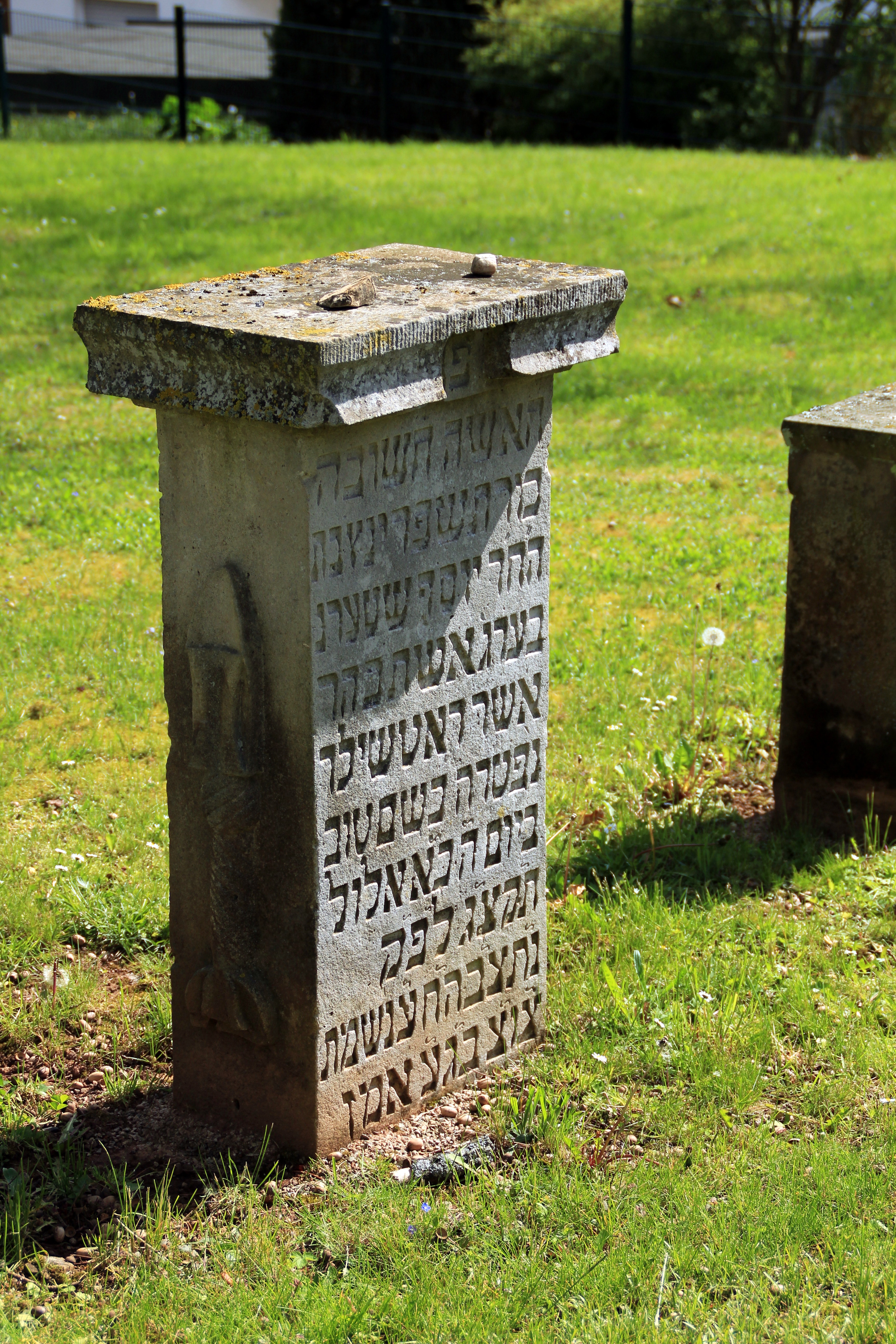 Aside from making such a statement, there’s another reason this headstone is so special. The Jewish Cemetery in Vöhl served the Jewish community there for over 100 years. During WWII, the Nazis ordered all the headstones removed to a nearby barn. The non-Jews of the area were told to use them for building material. At the end of the War, when the Allies came to the area, the people were told to restore the cemetery as much as was possible. A photo had been taken of it in the late 1930s, and the headstones were returned as close to their original location as was possible. Only about 48 headstones made their way home. While there are a few other Rothschild headstones there, Sprinza is my only direct antecedent.

While we were there, Camille photographed every headstone that was still legible, and created memorials for them on findagrave.com.

I wish I knew more about Sprinza, about who she was. All I know for certain is she was beloved. Following her death, six granddaughters and 1 great-niece were named Sophie.

In our next post we’ll learn more about Ascher, as well as his 2nd wife Blümchen Sternberg. In the meantime, if you’d like to learn more about my trip to Vöhl, you can read my “Tagebuch” on the Synagogue Vöhl website.