This is the second of two posts about “What’s in a Name” or, more appropriately perhaps, “A Tale of Two Isaacs”. The first post concerns Isaak Rothschild 1799 – 1875. The two men were first cousins, both being grandsons of Salomon Abraham Rothschild. This Issac is the son of Ascher Rothschild and Sprinza Sternberg. A lot of the information concerning Issac comes from the Synagogue Vöhl website. I’ll be sure to share where the other documentation comes from.

Isaac was the second child and second son born to Ascher Rothschild and Sprinza Sternberg. He was born 23 June 1820 in Vöhl. His name is sometimes written “Isaak”, sometimes “Isaac”, and sometimes “Isai”. Because of this, a number of the references to this Isaac were attributed to his cousin Isaak, and vice versa. It took a while to sort it all out.

On 5 September 1833, his mother, Sprinza Sternberg, passed away, likely due to complications in childbirth. Following her passing, the younger children were placed in the care of their father’s nephew, Ruben Rothschild, and Ruben’s wife, Helene Sternberg, who was Sprinza’s sister.

On 14 October 1842, in the Civic records of Vöhl, Isaac Rothschild is listed as “reclaimed citizen; Place of Worship – Vöhl; Occupation: Businessman; NOTE: Failed.” This indicates he’d moved away from Vöhl for awhile and had returned, and that his business, whatever it was, had failed. While it doesn’t indicate whether he worshipped with the Lutherans or the Jews, it was likely the latter. It is in this record that he also provides his date of birth as 23 June 1820.

Isaac married Friedericke Dilsheimer on 21 October 1847 in Offenbach. This information was written in the margin of the birth record for their daughter, Sophie. Friedericke was born 28 Jan 1824 in Aschaffenburg, the youngest child and daughter of Löb Dilsheimer and Geliche Wolf. 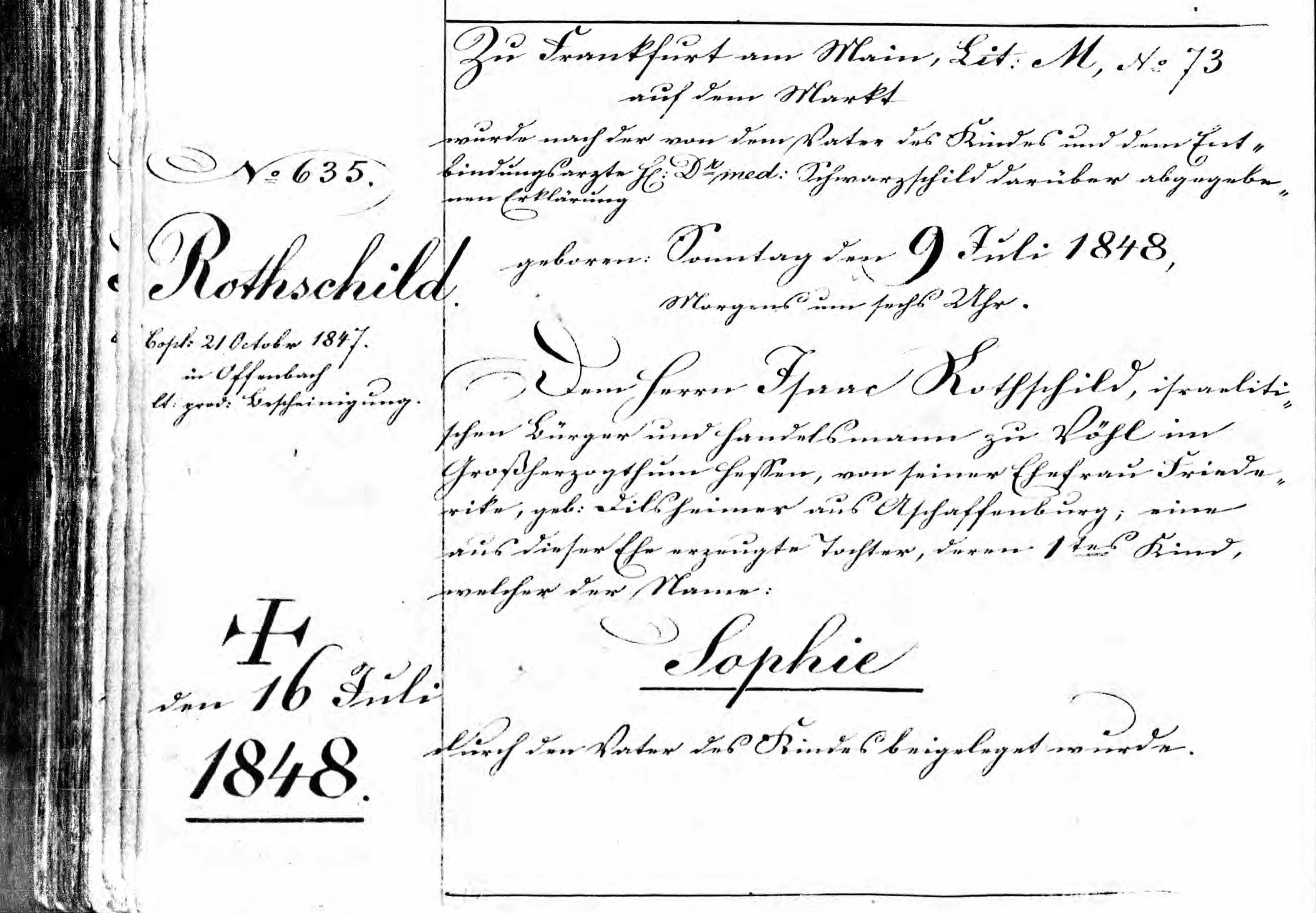 Shortly after their marriage, Isaac and Friedericke moved to Frankfurt. They were the parents of three children. Their first daughter, Sophie, was no doubt named for Isaac’s deceased mother Sprinza (aka Sprinz, Spring, Iris, Bertha, and Sophie). She was born 9 July 1848. Sadly, she only lived 7 days, and passed away on 16 July 1848, in Frankfurt. Their second child and only son, Gustave Gottfried Rothschild, was born in Frankfurt 16 May 1849. Their third child, Maria Rothschild, was born 29 May 1851 in Frankfrut.

After this, the trail for Isaac goes cold, and it’s easy to understand how he and the other Isaak were assumed to be the same person. Friedericke and the children also disappeared for awhile, but I finally found them. In 1875, the “Adressbuch von Frankfurt am Main mit Bockenheim, Bomheim”, found at books.google.com, lists: “Rothschild, Friedericke, gb. Dilsheimer, Wwe.” Rothschild, Friedericke, nee Dilsheimer, Widow. This led me to believe Isaac had died sometime before 1875. But then I found the marriage record for daughter Maria, who married Maximilian Sander of Frankfurt on 30 May 1870. Sadly, the marriage was short-lived, as Maximilian passeed away 27 October 1871. It’s interesting to note that Maxilian’s parents were Alexander Sander and Lenchen Dilsheimer. Lenchen and Friedericke were sisters. So, first cousins got married, which is a little close for comfort in my book. But what really caught my attention is the marriage entry states the bride’s father, Isaac Rothschild, is living “in New York in Amerika.” Well, isn’t that interesting. What’s he doing there? 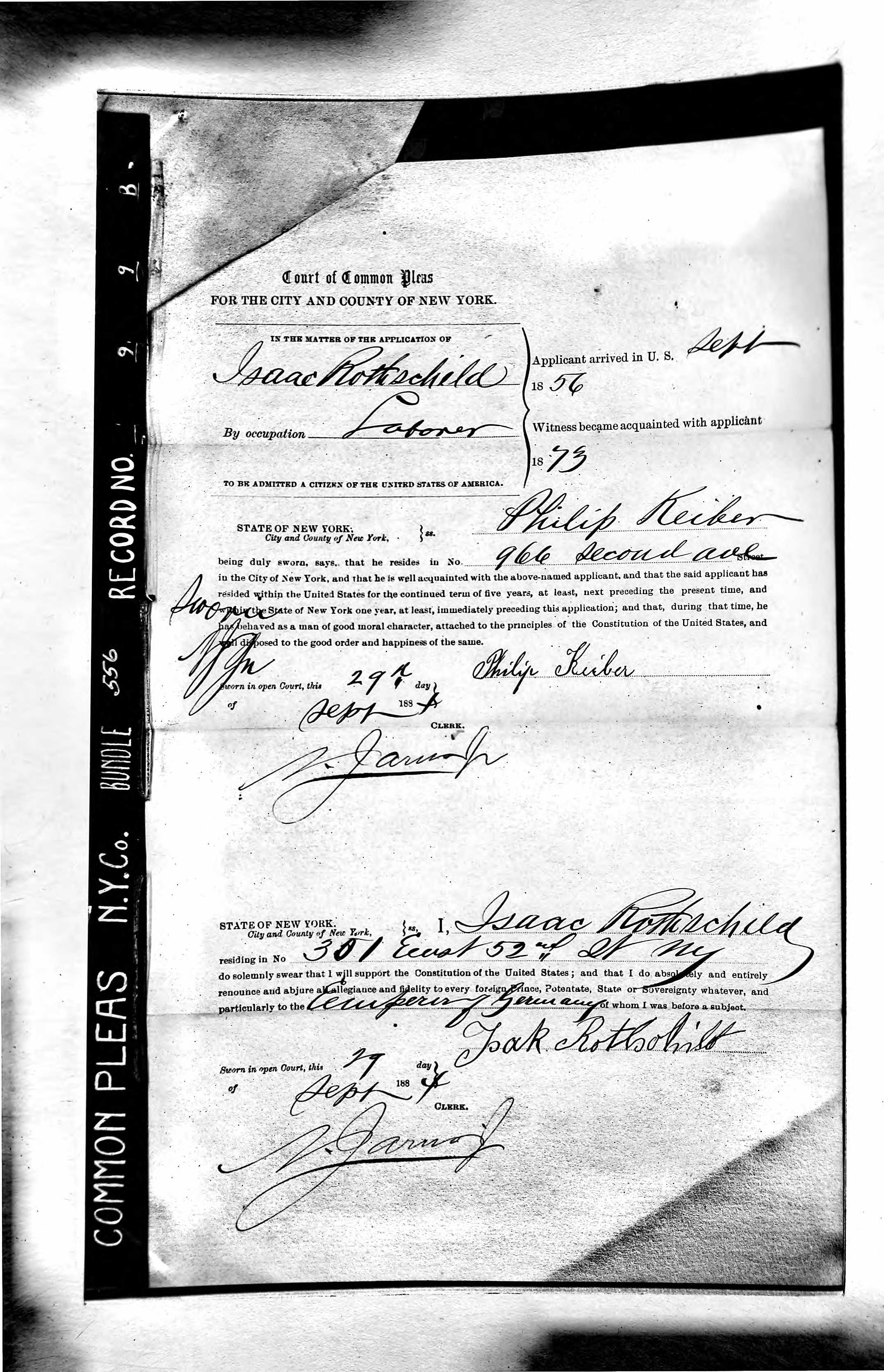 According to his US Naturalization records, Isaac arrived in New York City in September 1856. He appeared before the Court of Common Pleas on 25 April 1877 and declared his intent to become a US Citizen. His request was granted 29 September 1884. I was able to find Isaac Rothschild listed in several City Directories for New York City between 1880 – 1892. He ran a leather goods import/export business. His home address on East 52nd St wasn’t in a very upscale neighborhood, but it was close to the docks and the warehouses, so likely convenient for his work. Isaac’s bid to become a Naturalized Citizen was approved on 29 September 1884. He listed his address as 351 E 52nd Street, the same address as Isaac Rothschild the leather merchant listed in the city directories, confirming this is the same person.

Maria married Emmanuel Mayer on 24 December 1874, in Paris, France. She was yet again listed as the daughter of Isaac Rothschild and Friedericke Dilsheimer. Maria and Emmanuel were the parents of Alice Leonie Mayer (1877 – 1944).

On 15 January 1882, his sister Bertha Rothschild Ballin passed away in Hoboken, New Jersey, which is just across the Hudson River from New York City. When Bertha’s husband, Max Ballin, passed away a few years earlier, his will listed his executors as having control over the estate, and indicated his wife would receive a stipend. Because of that will, the same executors were to disperse Bertha’s estate to her beneficiaries. They did not. And so the beneficiaries, led by her brothers James Otto Rothschild and Isaac Rothschild, both of New York City, filed suit in the New Jersey Surrogates Court of Hudson County. This 80+ page document turned out to be a fantastic piece of information, as Bertha lists all of her living siblings, as well as the children of those siblings who were deceased.

From the France Archives we learn Isaac’s son Gustave married Hélène Clémence Noémie Lévy in Paris on 24 May.  “Marriage contract between Gustave Rothschild, born in Frankfurt (Germany), German subject, commission merchant, rue d’Hauteville n ° 38, son of Isaac Rothschild, also a merchant, residing in New York (USA), and Frédérique Dilsheimer, rue Lafayette n ° 106, and Hélène-Clémence-Noémie Lévy, rue du Faubourg Montmartre n ° 30, daughter of Bernard Lévy and Sarah Davis.  Further information:  Other act following May 24, 1886: filing of the marriage certificate and publication papers. Among the property, the future husband brings in marriage the rights in the partnership between him and Wilhem Dilsheimer, for the operation of a house freight forwarder in Paris, rue d’Hauteville No. 38, under the company name ‘Dilsheimer and Rothschild.’ From this record, we see that Friedericke (aka Frederique) is alive and living in Paris.  The William Dilsheimer listed here is Gustave’s 1st cousin.  He was the son of Friedericke’s brother Joseph Dilsheimer and his wife Rosalie Eskeles. Gustave and Helene were the parents of Henri Leon Rothschild (1887 – ?), and Marthe Sarah Rothschild Wolf (1889 – ?). 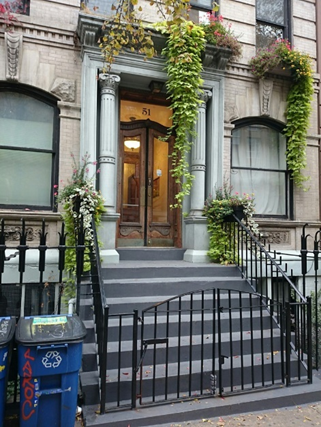 In 1892, Isaac retired from the import/export of leather goods, and turned the business over to his son Gustave. Upon his retirement, he moved to 51 St, Marks Place in New York, a boarding house run by Mrs. Fritsch. It was there, on 26 December 1897, that Isaac passed away. His death made the New York Times, and reads as follows:

An Old-Time Leather Merchant Suffocated in His Room by Gas – Familiar East Side Figure.

Isaac Rothschild, seventy-nine years old, of 51 St. Mark’s Place, was found dead in his room yesterday, having been killed by breathing illuminating gas, which had escaped from an unlighted gas stove.  It is believed by his friends that death was the result of accident and not suicide, as reported by the police

Mr. Rothschild had occupied a room on the top floor of the house since he retired from the business of a leather merchant five years ago.  When he retired, he turned over his capital to his son, Gustave, on the condition that the latter would support him during his declining years.  The son opened an establishment in Paris and sent his father a liberal allowance monthly.

About two years ago, Mrs. Helen Fritsch put a gas stove in the old man’s room.  One night, however, through carelessness he left the unlighted burners open and was found unconscious on the floor.  He was with difficulty resuscitated.  That accident happened not long after the stove was placed in his room.  Then the gas stove was replaced by an oil stove, but the old man complained the other day that the oil stove smelled badly and he wished the gas stove back again.  His desire was acceded to, and the gas stove was replaced on Christmas Day, with particular warning that he use it properly.  He said that he understood its use, and would be very careful.

Mr. Rothschild retired to rest about 10 o’clock on Saturday night, after having passed a pleasant hour with others in the house.  At 2 o’clock yesterday afternoon, a servant tried to get into his room, but found the door locked.  She also smelled the odor of gas, and informed Mrs. Fritsch.  Others then went to the room and forced open the door, to find the aged occupant of the apartment lying dead on the floor, with volumes of gas flowing from the burner in the stove, which had been left unlighted.  It was evident that the stopcock had been turned off and on again.  Mr. Rothschild was in his night clothing.  He had apparently gone to bed and had been awakened by the sensation of suffocation.  With an effort, it is supposed, he arose and fell unconscious while attempting to make his way out.

His friends scout the idea of suicide, for they say that he was a man of contented mind.  He was a familiar figure in the neighborhood and a favorite of the children in the entire vicinity.

Mr. Rothschild’s wife died many years ago.  Besides his son, a married daughter lives in Paris. 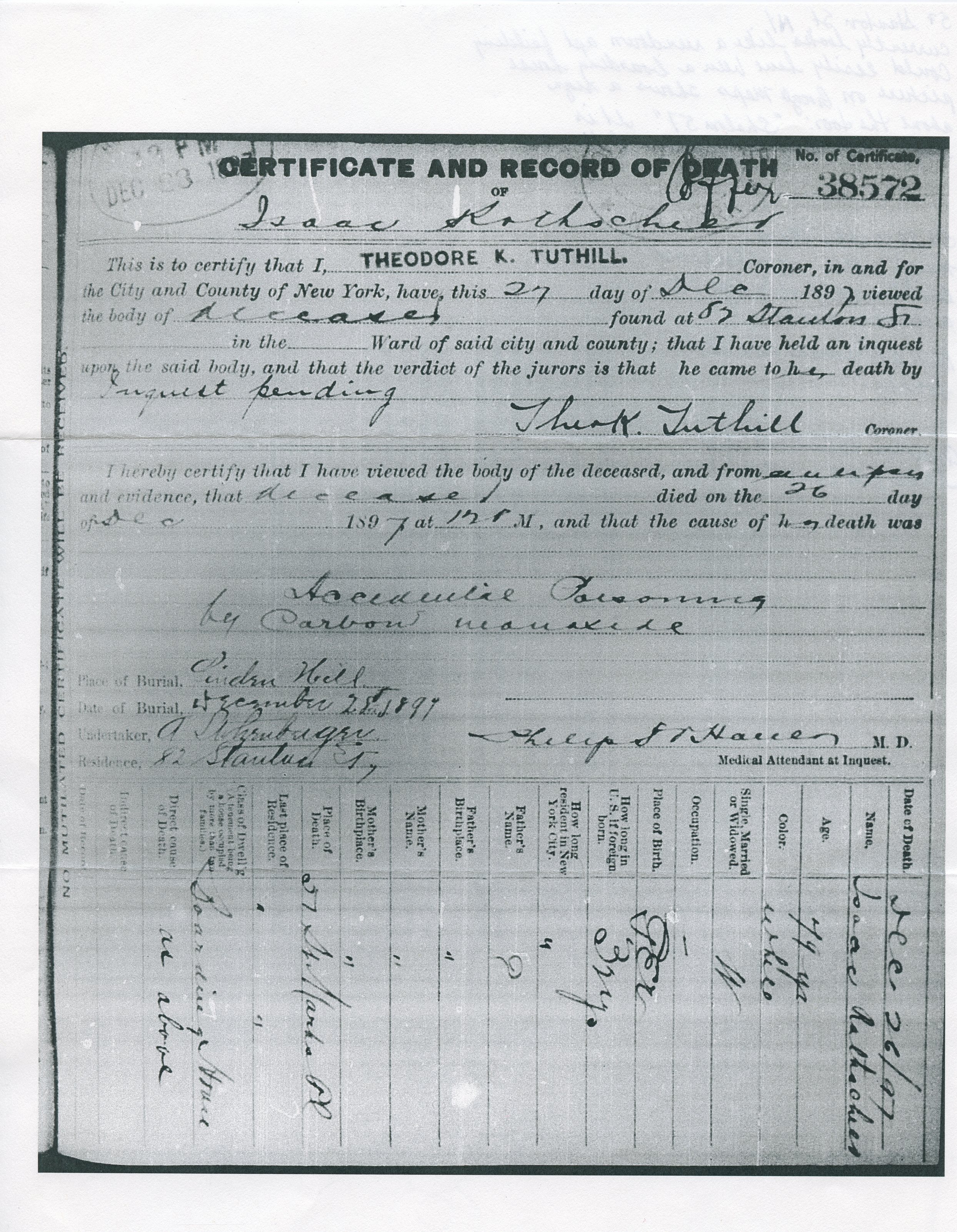 His death certificate indicates he’s buried at Linden Hill Cemetery. My cousin Camille, who lives in New York City, took an outing to Linden Hill Cemetery, and could not find him anywhere. While she was there, she met a kind Samaritan who informed her Linden Hill has two halves: the Jewish half, and the Methodist half. A little bit of metaphorical digging, and she found him, in an unmarked grave in the Methodist half. Without relatives nearby — his closest living relative would have been his younger brother, Adolph, who was living in St. Louis, Missouri at that time — it’s believed that his landlady, Mrs. Fritsch, or some others of his acquaintance, arranged for the burial.

As for Friedericke, like Mark Twain, the rumors of her demise were greatly exaggerated. She lived the remainder of her life in Paris, outliving her husband by nearly 6 years. She died 10 August 1903 in Montmorency, Val-d’Oise, Ile-de-France, France. She is buried in Montparnasse Cemetery in Paris.