I’m combining the entries for Simon and Selig Stern because there’s so little information on Simon, and the two spent their lives together. As always, unless otherwise noted, the information comes from the Synagogue Vöhl website.

Both were the two oldest sons of Märle Rothschild and David Stern, and the grandsons of Salomon Abraham Rothschild.

Simon was born in 1799, and never married, most likely because he was deaf and dumb. In 1838, he was placed in the guardianship of his brother Selig. I would imagine this is because one or both of their parents were dead at this point. Simon is known to have lived with Selig until 1853, and there is no other mention of him after that point. I believe he probably died.

Selig Stern was born 22 March 1800 in Vöhl. His birth has been recorded not only on the Synagogue Vöhl website, but also on findagrave.com. His headstone was, luckily, returned to the Jewish Cemetery in Vöhl following the end of WWII. He is also referenced in the book by Hanno Müller entitled “Juden in Schotten (1629 – 1945) und Einartshausen (1800 – 1942).” NOTE: I do not currently have a copy of this book, but have purchased one, and it’s on its way to me from Germany. Always good to have another reference book! 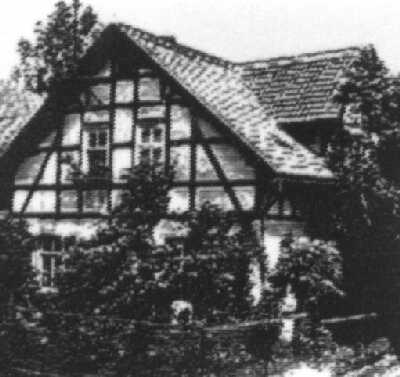 Selig Stern and his family lived at Arolser Strasse 19. The house stood a very long time, long after Selig had passed, eventually burning down. It has since been rebuilt, but I’m sure looks different. This is what it looked like before.

Selig’s second wife was Helene Lenchen Kugelmann. She was born in Vöhl in 1839 to Joseph Kugelmann and Julie Belchen Goldenberg. This means that she was younger than all of Selig’s children except Madilde. The text of the marriage certificate reads: The Authorized representative of the Großhl. Rabbinate of Giessen, teacher S. Baer of Vöhl, has today in the opinion of Gr. District official marriage certificate, like Gr. Regional court certificate, that the execution of the marriage is not an obstacle under private law, and that nothing stands in the way of the marriage of Selig Stern to Lenchen Kugelmann from here today in the presence of the two witnesses: Salomon Liebmann and Koppel Katzenstein, both from here, and they were married according to Jewish rite. Vöhl, 17 June 1864. S. Baer, Authorized Representative.

Less than a month later, on July 8th, the birth of a daughter was recorded, but no name was mentioned in the birth register. They do say the first baby can come at any time and all the rest take 9 months, but three weeks? They were cutting it a bit close. The birth register goes on to state the father’s year of birth as 1800, and that this was the first child born to this marriage, and to the mother. I haven’t been able to find any other information about this daughter. Helene Kugelmann Stern died sometime after 1900, presumably in Vöhl.

Starting in 1821, Selig was a member of the Jewish Community Board. He held many positions, including that of treasurer, and in 1835 was the head of the Jewish Community Board. In 1827, he was involved in dealing with our old friend “The Basdorfer” over the cost of the building of the school/Synagogue. And in 1829, according to Simon Kugelmann, Selig was one of the 14 members involved in the raffle for seats in the synagogue, and that he bought the first and most expensive seat for 12 fg. Since I know the Ascher Rothschild family secured Platz Nr. 1, I have to believe Ascher acquired it by right of having financed the construction. Does that mean Selig Stern secured Platz Nr. 2? In 1845, the District Councilor Zimmerman asked Mayor Wiseman to decide whether Selig Stern could retain his position or if someone else would be more suitable. The Mayor responded that both were good candidates, but that Selig had the better arithmetic and writing skills, and would therefore be better suited. In 1849, there was a vote regarding changes to the Board membership. In the end, the Board consisted of Selig Stern, Salomon Kugelmann, and Abraham Rothschild. For some reason, he stepped down from the Jewish Community Board in 1851, but was back again in 1853.

Selig was a merchant, dealing primarily in wool, some fruit, and occasionally horses. He was in the most taxed half of the population. But I have to wonder if he always paid his taxes. In 1838, there is a complaint about the trade tax, and the administrator of The Grand Ducal Hessian Tax Commission asks Mayor Prinz to determine “how large, approximately, the annual quantity of wool and fruit, as well as the number of horses, that Selig Stern buys and sells.”

In 1835, Dr. Nuss inspected the Mikveh in the basement of Selig’s house, and found it in very poor condition. Selig explained to Dr. Nuss that it would no longer be used for its original purpose, but didn’t want to fill it in either because the cellar would then be filled with water. Dr. Nuss did not agree with this assessment. Wish I knew what the final decision was.

I’m beginning to think the laws in Vöhl were either very strict, or the people of Vöhl were a litigious lot. In 1831 or 1832, Selig was fined 5 guilders “because he left a workhorse unburied.” Eww! The informant was District Administrator Diez. In 1833, he had a claim of 19 guilders against Peter Schäfer; District Judge Koch ordered an auction be held. In 1842, former resident Heinrich Heinze had debts to Selig Stern as well as the savings and loan fund. His village property and fields were auctioned off by Mayor Prinz at the request of District Judge Koch. The next year, Selig appealed against Heinrich Heinze in a bankruptcy matter. And in 1865, he was sued by his cousin Abraham Rothschild over a boundary dispute.

On 16 February 1893, the following appeared in the Korbach Newspaper: Vöhl, February 15th. Yesterday evening at 11 o’clock, Mr. Selig Stern died here at the age of 93 after a five-week sick bed. The deceased, who was probably the oldest person in the entire district, was in very good health, until recently, for such an advanced age, and had made numerous trips in the previous year. 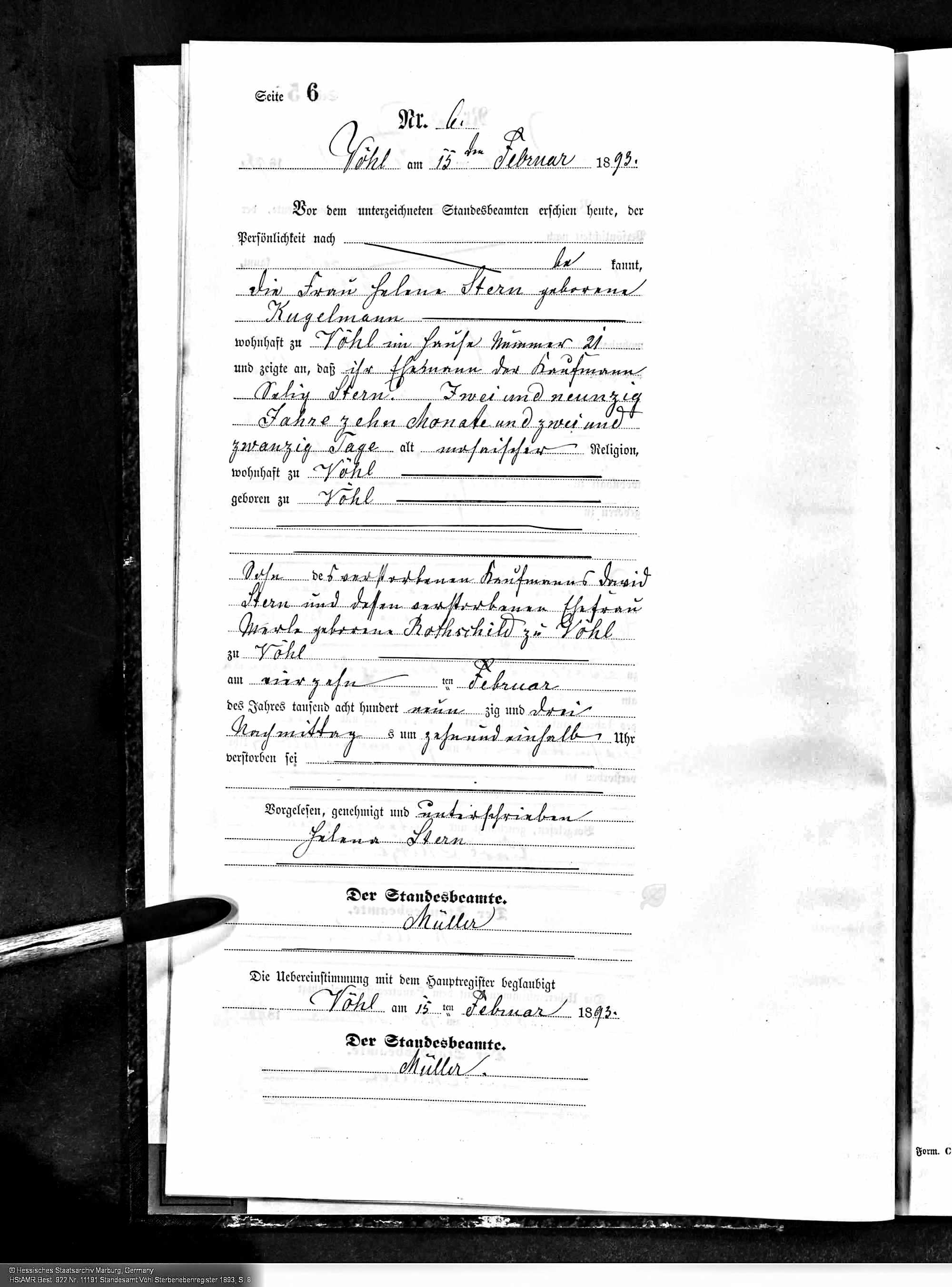 Selig was buried in the Jewish cemetery in Vöhl, and his headstone was returned there after WWII. It is in excellent condition, with a light covering of green moss. The lower Germanic portion of the stone reads, Here rests Selig Stern, born 22 March 1800, died 14 February 1893. Rest in Peace. The upper Hebraic portion of the stone reads, Here lies Yehoshua, son of the Levite Dovid, born 23 Adar 5560, died Wednesday 29, 5653. May his soul be bound in the bond of life. HUGE thanks to Tova Levi from Tracing the Tribe for help with the translation. You confirmed, and filled in the blanks, for what’s on the Synagogue Vöhl website. And thanks to my cousin, Camille Calman, who took pictures of all the headstones in the Jewish Cemetery of Vöhl and created memorials for them on findagrave.com. I meant to follow your lead, but got distracted.

Next time we’ll learn about Simon and Selig’s brother, Bär Stern. Until then, stay healthy and stay safe.

3 thoughts on “Simon and Selig Stern”